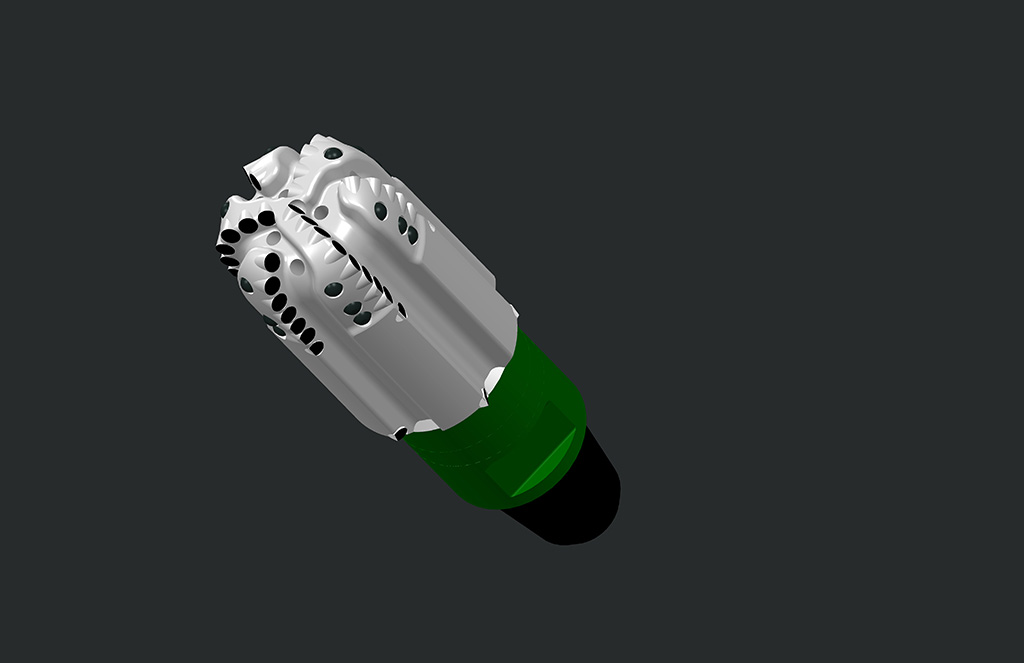 Specialized polycrystalline diamond compact (PDC) bits for bridge and fracturing-plug drillout have been successfully tested in a series of Bakken formation wells. Compared with standard milling bits, the bits averaged a 40% increase in plugs drilled with 40% more total drill time while improving the drilling rate to an average 5.5 minutes per plug. The fixed-cutter bits are designed specifically for plug drillout in multizone completions, where metal, composite, and elastomer plug components present drilling and cleanout challenges. The solid-body bit is the latest entry in Varel’s SlipStream plug drillout series. A roller-cone design with a steel-tooth and tungsten-carbide insert cutting structure has been extensively run in south Texas, where greater efficiency and less wear has improved drillout performance.

The PDC bit, like the roller-cone model, was designed with an integrated modeling and design software that allows bit models to be realistically run and studied in an Earth model. Field results are incorporated to further refine design reference data and performance.

The design emphasizes the efficiency and reduced wear achieved with the roller-cone design while providing the inherently greater reliability of a solid-body bit. Shock studs located strategically around the bit shoulder and gauge minimize torque. The feature helps limit interaction with the fracturing plug for a more efficient cutting structure and reduced torque. Passive cutter back rake also helps reduce torque generated by the bit when cutting.

Bit life is enhanced by a longer gauge that enhances stability and durability. The cutting structure is a six-blade, 9-mm PDC design plural set for redundancy, with cutters on different blades located on the same radius from the center.

Three SlipStream PDC bits were tested in Bakken wells and their performances were compared with each other and those of two standard mill bits. Two 3.8-in. and one 3.85-in. model were run on coiled tubing in 4½-in. casing. As a group, the PDC bits drilled significantly more plugs in approximately the same time per plug. In the second run, the bit drilled nearly twice as many plugs as the offset average, at the highest rate per plug (Table 1). The design produced dime-sized or smaller cuttings, which aided cleanout. Durability was also high, with two bits dull-graded excellent and the third repairable.

PDC Run 1. The 3.8-in. test bit drilled 45 plugs plus the kill plug at an average of 5.9 minutes per plug. This first run was very close to the average offset time per plug; however, the bit drilled roughly twice the number of plugs. The bit was dull graded 1-3-LT-S-X-X-X-I-CT-TD and was generally in good condition. However, the loss of two cutters resulted in the below-average but repairable grade. Overall, this was a successful run given the number of plugs drilled, drill time, and repairable dull condition. While plug part returns were slightly larger than those produced by offset mills, the time between plugs was faster than all offsets.

PDC Run 2. The 3.8-in. bit drilled 59 plugs plus the kill plug at an average 5.1 minutes per plug. This run drilled the full set of plugs in the well. The dull condition was excellent (1-3-CT-S-X-I-CT-TD) with a little wear on the nose and shoulder. This bit had the fastest drill time (5.1 minutes per plug) over the largest number of plugs (59). One offset mill bit drilled slightly faster at 4.9 minutes per plug, but only drilled 23 plugs. Higher-than-normal backpressure in the well negatively affected run downtime between plugs.

PDC Run 3. The 3.85-in. PDC drilled 56 plugs and the kill plug at an average 5.38 minutes per plug. Time per plug was a little better than the offset average, but the bit drilled out significantly more plugs than the 32-plug offset average. The dull was in excellent condition (1-3-CT-S-X-X-X-I-CT-TD) with some wear on the nose and shoulder.

Drillout Performance. The fixed cutter bits designed for fracturing-plug drillout significantly improved performance compared with offset mill results. The cutting size produced by the bits was easily circulated out of the wellbore, and the bits were durable, drilled more plugs, stayed in the hole longer, and improved the plug-drilling rate.